Kidnapped and claimed for his bed . . . 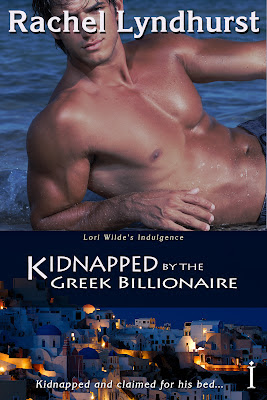 Kidnapped by the Greek Billionaire will be released as one of the launch titles for Lori Wilde's Indulgence line with Entangled Publishing on February 14th 2012.


Or that’s what it feels like to Kizzy Dean when a business disagreement with arrogant Greek lawyer Andreas Lazarides leaves her no choice but to accompany him to the Greek Isle of Rhodes. It doesn’t help matters that this sexy brooding stranger, who is unaccustomed to the word No and the very idea of commitment, shows her what it feels like to be truly desired.


Amidst the ancient myths and alleyways, tensions run high as Kizzy feels an immediate attraction for the man she wants to both ravage and strangle.


Accustomed to gold-digging women, Andreas is mesmerized by Kizzy’s feisty nature and Gypsy beauty. Guilt and sorrow have been his only bedfellows since his sister’s death, but Kizzy stirs up a desire he’s unwilling to succumb to . . . until she makes him an offer he simply can’t refuse.
I'll be back on Valentine's Day!
Posted by Rachel Lyndhurst at 10:21