Phillipa Ashley asks: Is your hero for you – or your heroine?

I'm thrilled to welcome award winning author, Phillipa Ashley to my blog today to share her thoughts on romance heroes.


Is your hero for you – or your heroine?
At a recent talk, Sue Moorcroft asked a room full of romance writers a very interesting question:
‘Are your heroes written for you or for yourself?’


My hand shot up instantly: for me, of course. Isn’t everyone the same?
Er, by the silence in the room, it seems not.


One category writer was incredulous: her heroes are for her heroine alone. “I’m happy for her and him bu he always belongs to her.”
Gulp.

Then I was worried because I end up falling a little for all of my men, despite being very happily married to the same fabulous man for the past 25 years.


But then the same writer said: ‘Oh don't be.  I know a very successful writer who confessed that she writes every book with the same hero who she’s fallen in love with. She even uses the same name and only changes it at the end.  His motivations and actions are different but in her mind, he’s hers and always will be.’
Well, I don’t exactly do that, I’m more of tart in that I’ve been faithful to a host of different men ove the course of 8 books - but it’s an interesting concept.


Perhaps, in a way, our heroes can only ever be variations on a theme. They have to be men we could fall in love with – by the end of the story at least, and as we know what makes a man a real hero in our own minds, that character can’t really deviate too far from our ideal.
He may look different, act differently, but fundamentally, he will  take the course of action that we as his creator, think is the right one. 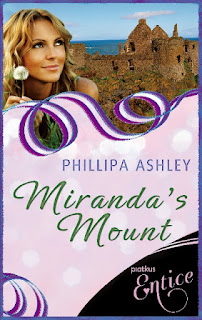 Phillipa's latest book, Miranda’s Mount, was published as an E-book on October 4thby Piatkus Entice and is a sexy, funny contemporary romance set in Cornwall.


When Miranda finds herself fighting for her home, her job and her heart, sleeping with the enemy may not be the best tactic…
With no family of her own, Miranda Marshall has developed a healthy respect – some would say obsession – with other people’s histories. As property manager of a spectacular island castle in Cornwall, she’s made St Merryn’s Mount one of the UK’s most popular heritage attractions. While she may have the castle running like clockwork, Miranda hasn’t bargained on its sexy owner returning to claim his birthright. Dark, handsome and with a rakish reputation, Jago St Merryn not only looks like a pirate but is intent on flogging the Mount to a soulless leisure corporation. Miranda faces the battle of her life as she tries to persuade him to face up to his past and continue the St Merryn dynasty. But Jago has his own reasons for jumping ship and when he throws down the gauntlet to Miranda, she’s forced to delve into painful memories she’d much rather keep hidden…

You can grab your copy at Amazon.com and amazon.co.uk right now!

Phillipa loves to hear from readers and you can find out more about her at her website or maybe say hello on Twitter -  @phillipaashley .