This week my contemporary romance The Spanish Billionaire's Hired bride was re-released as part of Entangled Indulgence's The Billionaire Bundle. The other two books are The Boss and Her Billionaire by Michele De Winton and Blackmailed by the Billionaire by Nina Croft.

And lovely Nina is here today to answer some probing questions about the hot topic  this week: Billionaires! 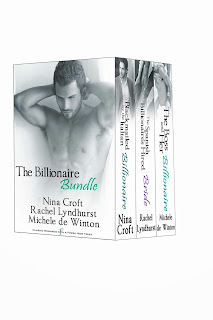 Are your heroes always billionaires?
Not always, though all my contemporary romance heroes so far have been billionaires. Luc, the hero of Blackmailed by the Italian Billionaire, actually owns his own island off Italy—we’re talking seriously rich here.
But I also write in a number of other romance sub-genres, including paranormal and sci-fi, and the heroes of those stories are usually not billionaires. Or perhaps, it’s rather that the subject of money rarely comes up. But then they do have other attributes…

We all write about billionaires, but just what makes rich men so sexy?
For me it’s a power thing. And while it’s not essential, money often goes hand in hand with success and power.
Of course, I could also mention the champagne and the private jets (Luc whisks Lia off to his island on a private jet while plying her with champagne…) but that would make me sound shallow.

Do you write what you know? (as in how many billionaires are you acquainted with, and can you introduce me to any?)
It’s so sad, but I don’t know a single billionaire—where are they all hiding? For that matter, I don’t even know any millionaires.
But I do have a very active imagination.
Actually, I very rarely write what I know, I love making things up. Some genres lend themselves to that much more than others (with paranormal and sci-fi romance there is no limitation but your imagination) but there’s still a lot of scope in contemporary romance—just explore your fantasies.

So we all love men with money – but what’s the next most important attribute you think a hero should have?
I’m going to have to think about this one, otherwise there’s a good chance I’ll come across as shallow… again (Hey, maybe I am shallow). But shallow or not, for me a hero has to be good-looking, gorgeous, stunning, totally sexy.
I could say they need a sense of humour, or they love animals, or loyalty to their friends and family, and while I’ve written heroes with all of those qualities, they are not essential. Being drool-worthy is.

Do you prefer your billionaires to be self-made men or old money?
Self-made, definitely. I like a hero who maybe has just a bit of a rough side, who’s been around, had to struggle, and maybe not had things easy all their lives—it’s character building. While Luc comes from money on his Italian mother’s side, his father was a small-time crook, and Luc grew up in the seedier parts of London and even spent time in prison.

What are you working on right now, a billionaire or something else?
I’m working on a paranormal romance for Entangled’s Covet line. It’s actually a sequel to a book releasing later this month, Operation Saving Daniel. Daniel actually was a billionaire, but with Bastian, the hero of the second book, I’m not even sure of his financial status. We’ve never actually discussed money. But he lives in a penthouse in London and drives a Ferrari so I suppose he must have quite a lot. On the other hand, he’s a sorcerer, so maybe he just waved his wand and they appeared…

Thanks for talking to us today, Nina, and don't forget the giveaway we've organised to celebrate this release. Enter below to be in with a chance to win Monopoly Millionaire, chocolate coins, a selection of backlist eBooks from all of us and a $10 amazon giftcard (or £ equivalent) !
a Rafflecopter giveaway

Nina Croft grew up in the north of England. After training as an accountant, she spent four years working as a volunteer in Zambia which left her with a love of the sun and a dislike of 9-5 work. She then spent a number of years mixing travel (whenever possible) with work (whenever necessary) but has now settled down to a life of writing and picking almonds on a remote farm in the mountains of southern Spain.
Nina writes all types of romance often mixed with elements of the paranormal and science fiction.
Find me at:Website Twitter Facebook
Posted by Rachel Lyndhurst at 14:44